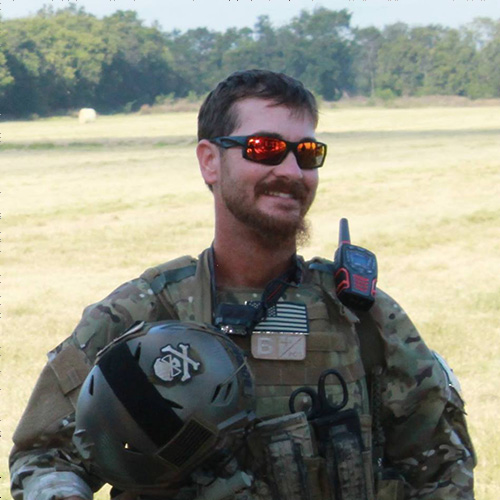 Jeff is a Marine Corps veteran, serving 8 years from 2000-2008. Jeff served with the 3rd and 4th Marine Divisions.

Early in his career, Jeff was selected to become a rifle and pistol instructor. As an instructor he trained countless Marines as well as foreign military members to include, Tanzania’s, Ugandans, Japanese, Koreans, and Australians. Jeff also acquired an instructor certification in Combat Marksmanship. As a Marine Infantryman and later with Marine Recon, he deployed multiple times to Iraq and other areas during Operation Iraqi Freedom and Operation Enduring Freedom.
While serving with 3rd Marine Division, Sgt. Kyle received the Navy Achievement Medal for leading the first Marine detachment to transport a nuclear submarine through hostile waters.

After leaving the Marine Corps, Jeff married and started a family. As a family, Jeff and his wife are very active in Veterans organizations, giving back to our brave warriors. Jeff’s love for weapons instruction did not stop with the Corps. He has a great passion and desire to educate and better hone individual’s skills with firearms and safety. 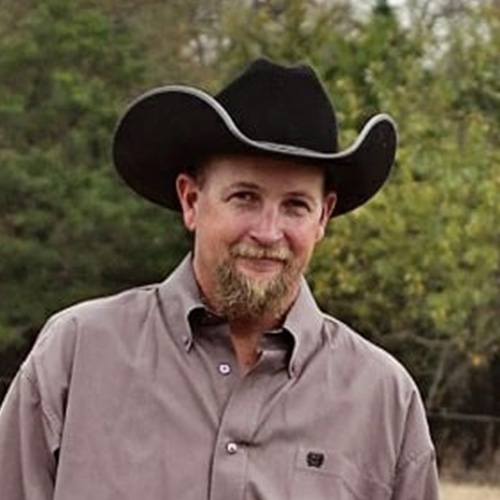 Bo grew up in Midlothian, Texas where he became friends/family with the Kyle family. Bo and Chris were teammates on several sports teams while in school. After high school, he attended Tarleton State University where he received a Bachelor of Science degree in Landscape Management and Maintenance.

Bo and Chris were roommates for 2 years at TSU. It was at college that Bo met his beautiful wife Jill. Bo and Jill have been married for 18 years and have been blessed with 2 wonderful children. Jase is now 14 years old and Jenna is 10. They have lived in Van Alstyne, Texas for the past 15 years. Bo is co-owner of JBS Express, which sells landscape materials and stone in the McKinney area, for the past 15 years.

Bo has been actively involved in the Chris Kyle Memorial Benefit since it was established in 2014. 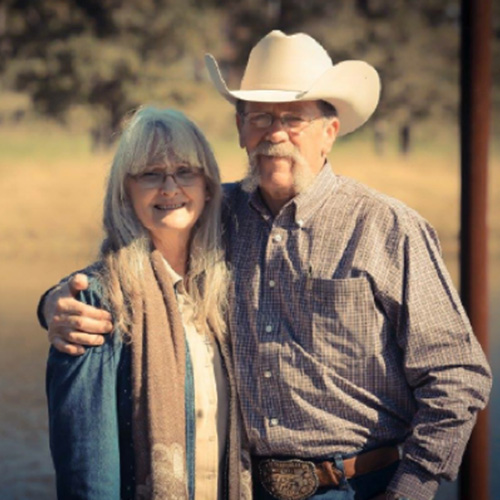 Wayne & Deby Kyle are the proud parents of Chris & Jeff Kyle. Wayne & Deby raised their sons in a country environment stressing the importance of values and ethics in everyone’s life. They also instilled in them patriotism and to stand and fight for the freedom that we have in our great nation. Both Chris and Jeff lived out their dreams of serving in the military and standing proud of their service and sacrifice.

Wayne spent over 40 years working in the corporate world. Deby has always been dedicated to her family and spent the early years of her sons lives at home teaching them and instilling the values they live. Deby went on to achieve her degree while being a mother, housewife, and businesswoman. She earned her degree in Criminal Justice, with an emphasis in Juvenile Detention Administration.
After Chris was killed, Wayne & Deby have dedicated their lives to spending as much time as possible with family and helping Veterans and First Responders. 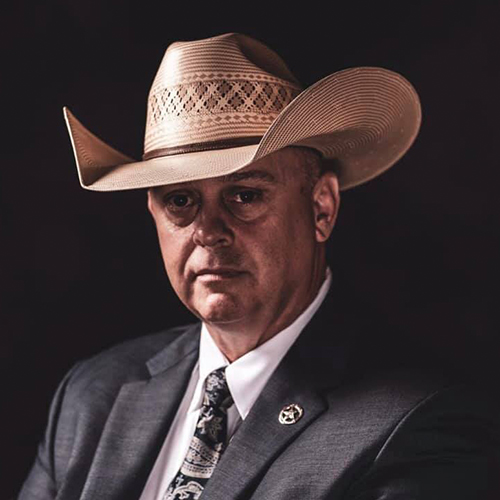 Michael is a native Texan, who grew up in Stephenville. Michael attended Tarleton State University, Majoring in Ag Business. It was during this time he developed a desire for service and pursued a career in Law Enforcement. Michael is a thirty-one year veteran of Texas law enforcement. He has served as police officer, Lieutenant, and as Chief of Police. He has been employed with the Texas Department of Public Safety for the past twenty-two years, serving as a Trooper, and Sergeant with the Department’s Criminal Intelligence Service, before being promoted to Texas Ranger in 2008. As a Texas Ranger, Michael primarily conducts investigations that range from major violent crimes, to public integrity investigations. Michael is a 2014 graduate of the University of Tennessee’s National Forensic Academy. Michael serves as team leader of Company “B” Crime Scene Team, a member of the Division’s Major Crime Scene Team, and serves as a member of the Texas Ranger’s Crime Scene Working Group. He is an Instructor in several Forensic disciplines. In 2010, Michael met Chris and was fortunate to witness Chris’ passion of helping his fellow veterans. It was through those encounters Michael developed a greater desire in supporting veterans and first responders. Michael and his wife, Becky, have two daughters, and are proud grandparents of one grandson. When time allows, Michael enjoys hunting and raising show cattle. 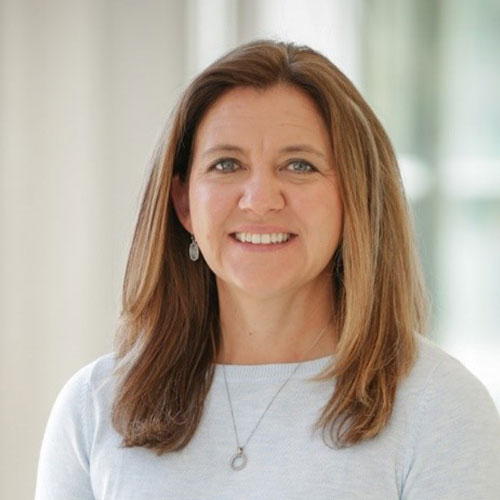 Angie grew up in Waxahachie, Texas and it was through her marriage to her husband, Jon Henson, that she met the Kyle family. Jon and Chris were childhood friends whose families vacationed together, then they became college roommates and when Jon and Angie got married Chris was a part of their wedding. Angie received a Bachelor of Science degree in Psychology from Tarleton State University and earned a certificate in Entrepreneurial Studies from Southern Methodist University.
Today, Angie is a Principal at Valesco Industries, a Dallas Texas based private equity firm that focuses on making control and non-control investments in select growth-oriented small- and lower- middle-market businesses engaged in manufacturing, distribution and business-to-business services. Valesco specializes in partnering with a company’s management team to support its growth objectives.
At Valesco, Angie serves in key roles related to new investment origination, portfolio management, investor relations and fund operations. She began her career at Valesco in 1998 leading research and business development establishing many of the proprietary processes and procedures of Valesco’s acquisition planning and program management. Her responsibilities were subsequently expanded to include finance/accounting, investor relations and fund operations. She is a member of Valesco’s Investment Committee as well as serves on portfolio company boards working with management teams to drive performance.
Angie has been involved with the Chris Kyle Memorial Benefit since it’s founding in 2014. She is also involved with the Mentors Care program in Ellis County where she serves as a mentor for at risk high school students meeting weekly with her student.
Angie has been married to Jon Henson, a Lieutenant for the Dallas Fire Department since 1998 and they have 2 children. In her spare time and when not following her kids around at sporting events she enjoys working out, reading, cooking/baking, going to movies and spending time with her family. 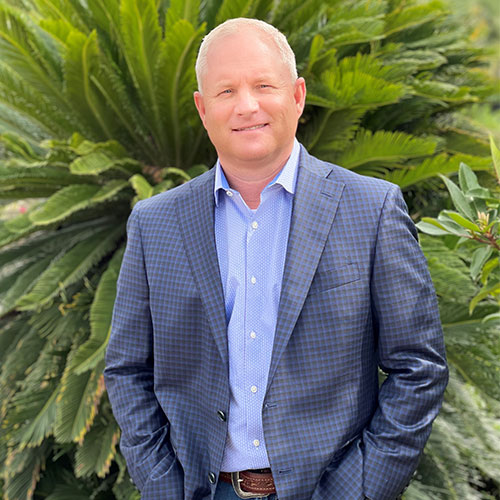 Justin was born and raised in Midlothian, Texas where he became friends with the Kyle family through church and school activities. Justin and Chris were classmates as well as teammates through out their years in Midlothian. Justin was raised by two Christian parents who instilled patriotism into their daily lives. Justin’s father John McMichael is an Air Force veteran of the Vietnam War. After high school Justin attended Tarleton State University where he received a Bachelor of Business Administration in Marketing.
Today Justin is the Senior Director of Sales and Operations for Master Halco, the Nations largest wholesaler of fence material. Justin has been in the fence business since 1997 when he was originally employed by Jamieson Fence Supply. Justin remained with Jamieson Fence Supply until it merged with Master Halco in November of 2019. In Justin’s current role he manages the day to day sales and operations of forty Master Halco branches. Justin is married to Heather McMichael who also grew up a close friend with the Kyle family. Together they have two beautiful daughters who keep them busy and full of adventures.
Justin has been involved with the Chris Kyle Memorial Benefit since the beginning in 2014. Justin is active in his local church and other community activities, but his true passion is his family. In his spare time, he loves to fish and Hunt, but most of his time is spent watching his oldest daughter pursue her dreams in college and his youngest daughter chase her dream of playing volleyball in college. 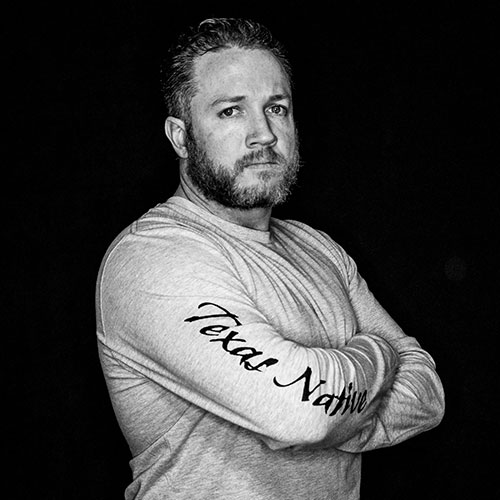 Taos Ford is a true Texas Native. He was born and raised in Plainview, Texas where he learned the values of God, hard work and family. He moved to Arizona in 2000 and returned to Texas in 2009, where he met his wife Jen. They quickly married in 2010 and have three boys, Tristan, Trace and Trenton.

After reading American Sniper, Taos learned that he could give back to those that served us, even if it was something simple, like mowing the grass, as Chris would say. Taos believes in living life with his hands out and palms down to give, rather than out and palms up to take. After just one night at the Chris Kyle Memorial Benefit, he and his wife knew they were at the right place.

Taos always dreamt of starting a business that could impact the lives of others. In 2018, Taos teamed up with his brother Trey, and cousin Tanner to start Texas Native Apparel. Working for themselves has provided the opportunity to give back and work for others. 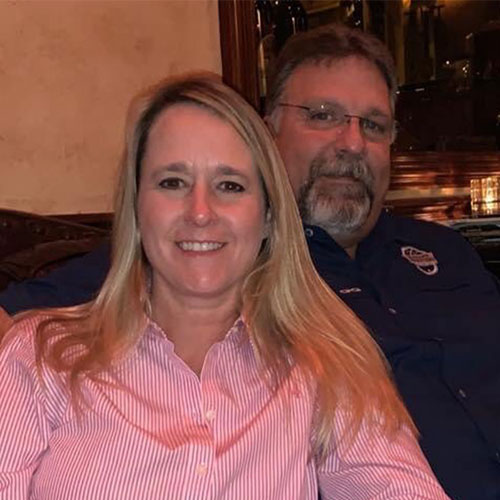 Sherry Mckenzie grew up in a law enforcement family in Amarillo Tx. Her father spent 32 years with Texas Department of Public Safety. The respect and love of those who serve others came natural to her from an early age. Sherry attended college in Tyler where she met her husband Matt. Together they have built several successful businesses and she currently serves as Vice President of Texas Ranch Outfitters Inc. She also has the same role with Cowpuncher Bit and Spur and also Stockman’s Saddlery. Sherry is an avid hunter and clay shooter. She and Matt met Chris through a mutual friend and were building a buckle for him when he was tragically taken. That buckle was given to Jeff at the first CKMB event Hamilton and Sherry has been a part of each event since.